You are here: Home / You Keep on Going 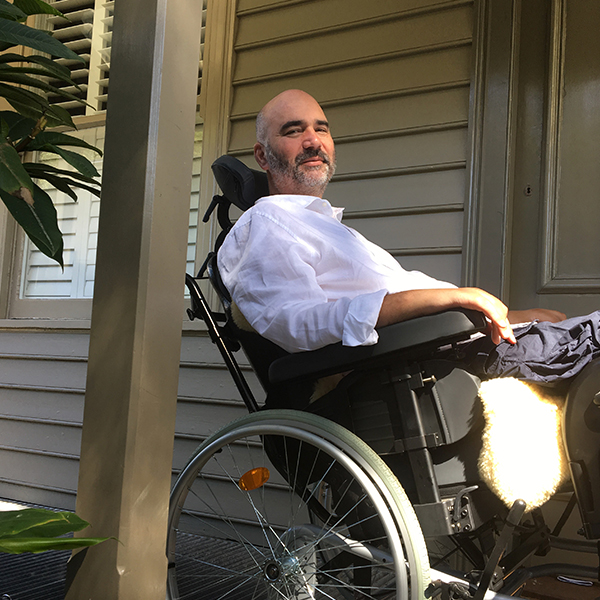 In 2010 Peter Schutzinger was living a life like many other Australians. A father of 2 boys, a loving husband, a devoted son and brother and adored friend to many. He enjoyed an extremely active fulfilling life until at the age of 42 his whole life was turned upside down. Suffering from an increasingly bad back he sought medical advice and following horrendous testing was given the most brutal and devastating diagnoses… Motor Neuron Disease with only two to three years to live!

This is a story of the human strength it takes to wage a fight against the odds and to never yield. His story involves a journey that has amazed his team of doctors, rallied experts from around the world, united medical research organisations and won the hearts of everyone that has come in contact with him.

Since his diagnosis Pete has practically tried every drug and treatment that has the possibility of slowing, stopping or eliminating this terrible disease. From stem cells, to trial drugs, to experimental therapies in Uruguay, Mexico, Germany and Bali, some of which kept him away from his family for over 18 months. He has searched the world trying to find an answer leaving no stone unturned. A different person may have felt like throwing the towel in, giving up, as the mental and physical exhaustion of this disease is immense. But Pete didn’t do that. Each time he picked himself up and pushed forward. He did this despite knowing that none of the treatments worked. And despite knowing there is no cure or drug that halts progression, but because of his unwavering philosophy that there must be an answer he just had to keep searching.

Whilst actively observing the research occurring worldwide it became obvious to Pete that the current MND research was looking at the wrong thing and certainly didn’t make a lot of sense in relation to the presentation of sporadic ALS. In fact, it seemed important questions needed to be asked with respect to many issues surrounding the approach to current research thinking. So in 2017, after meeting Matt Keon a highly motivated, out-of-the-box-thinker they decided to look at things differently. Their belief was that MND is not a gene specific issue, rather a network issue that relates to an underlying viral infection and subsequent auto-immune dysfunction.

This small, self-funded team took on the task of identifying the right scientists, brilliant mathematicians and innovative thinkers all focused on trying to make progress big or small.

Fueled by an urgency to find answers, the small team at Iggy Get Out quickly established a research hub in Sydney, recruited leading auto immune scientist Nitin Saksena (who passionately believes in the project), and a team of leading mathematicians from around the world to develop algorithms to analyse the data.

Our integrated model looks at every piece of information for an individual. From the genome, RNA, the microbiome, metabalomics, proteomics and clinical data. Coupled with bioinformatics and the best computer scientists in the world. And with collaboration at the core of our approach, we have been sharing our hypothesis with MND research groups in Australia and overseas.

What started as a small idea has grown into a team of passionate scientists, mathematicians and researchers who are relentlessly committed to finding the cause of the disease and we’re determined to make a revolutionary breakthrough in the search for underlying genetic modalities causing MND and other neurodegenerative diseases

Want to join the discussion?
Feel free to contribute!

Our Disruptive Mission
Scroll to top